What I talk about, not necessarily in this order:
* Veterans Day Sew In (VDSI)-Google Hang Out.
I spent a lot of my day on "Tweet Chat" and some on "Google hangout".  I was also quilting my log cabin top as well as what working on this:

While I was sewing on the Bernina, the screen kept shutting off. It was sewing fine, when it was on, so I decided to try to finish the chevron blocks. I thought it would be best to complete the top using the same machine. Well, that didn't quite work! I got frustrated having to "reboot" the machine every few minutes. So, I packed her up and off to the hospital for her. She is well overdue for her checkup. continued to work on my "Ups & Down" quilt top. Using the chunking method to complete this little 4" squares-four in each block. I used the MSQ tutorial-swing a 1/4" all around. This is a very quick method for getting 4 hst, but you do have bias edges! I will say, I didn't do quite as much tweeting during the SMSI as I did on during the other sewin. However, I still had fun.

The top is remains on the design wall. I am debating to add two borders or just bind it. I haven't decided what color the binding will be. Any suggestions or thoughts on finishing?
*Tops Quilted: Log Cabin, PinWheel

I have taken the plunge. I will be making 6 blocks for the cause. I should be able to get those completed and mailed off during my time off. I have chosen black to frame me blocks with. I think the suggested colors were black, dark gray, brown, navy or a dark color that will make your block pop. I have added a link if you are interested. At this time, the block drive is an ongoing effort. You can make blocks, do piecing, or volunteer to quilt a top.

A picture of my backing with the diagonal fold.

An explanation of the diagonal backing calculator and it's limitation. The formula was developed by John Flynn. There is a link for him on the calculator pate. I will admit, I didn't do it justice. The link:

A few shows on my radar coming up soon!

Posted by AJ (The Quilting Pot Podcast) at 8:55 PM

AJ (The Quilting Pot Podcast)
I a mom of 3 adult children and 2 "furry babies". I enjoy weaving, knitting, spinning and quilting. My favorite color is "PURPLE"!

In The Craft Room 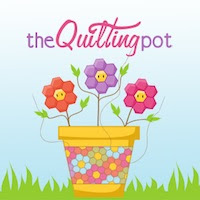